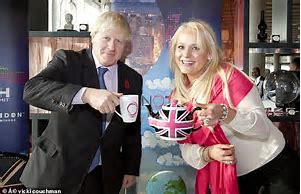 Just the very notion of the Prime Minister getting jiggy with another human being, seems to provoke in me a rather violently negative physical reaction something akin to wanting to take a rusty scythe to my own genitalia, such is the hideousness of the image.

But what he does and doesn’t do in the bedroom with other consenting adults is not for me. I just don’t care. It is clear that he is a man with a morally questionable and robust interest in the opposite sex. That’s for him. Does it impress me? No of course not. Does it make him less fit to hold high office? Not for me to judge.

What does cause me concern, and what should cause all of us concern is the way in which this man goes about his job as the country’s Prime Minister, because the details of his dealings with Jennifer Arcuri seem to confirm three things: first, that he is not capable of levels of honesty that we should demand in our senior politicians; second, that he is capable of potential misappropriation of public money; and third, that the political message he is currently ramming down the throat of the general public is born out of rank hypocrisy.

Let’s start with the question of the PM’s honesty. Now, on the 29th September 2019, Johnson appeared on the Andrew Marr show and was asked the fairly straight question whether he should have declared a conflict of interests when his Mayoralty was dealing with Arcuri’s applications for funding and assistance – to which he answered, ‘there was no interest to declare.’ Since then, it transpires that the two were at the very least engaged socially, which renders his answer untruthful. The Prime Minister has a long history of putting inconvenient truths to one side to suit his own cause – should we be worried about this? Damn right we should. The ability to trust our Prime Minister not to mislead us, should be the very least that we demand.

It also transpires that her company Innotech, was awarded £26,000 worth of grants from the public purse whilst she, personally, was allowed to travel on foreign trade missions with the then Mayor. This year, her latest company Hacker House was given a £100,000 grant from the Department of Culture, Media and Sport. The code of conduct which arose from the Nolan Report into standards in public life, details integrity, openness and honesty as three of its seven principles – it states very clearly that those holding public office should not use their position for the financial benefit of others, it stresses the need for transparency in all matters involving the public purse, and it states categorically that any conflict of interest must be declared in matters relating to their public duties.

Now, as we know the matters involving Innotech, Arcuri and Johnson have been referred to the Independent Office for Police Conduct and, far be it from me to pre-judge a police investigation, but it seems clear to me that Johnson’s assertion that he had ‘no interest to declare,’ suggests that there is a prima facie case for him to answer.

So should we be worried that our PM might be involved in the misappropriation of public funds? Damn right we should.

We brings me to the final point of concern – the politics of all this.

Since he saw the gap in the Number 10 market, Johnson has done everything he can to position himself as the ‘people’s tribune’, the man who will fight the ‘establishment’ and ‘elite’ to bring about their Brexit. On these pages we are keen to expose this for the hypocritical bullshit that it is. So, let’s have a look at the ‘people’s tribune’ through the lens of the Arcuri affair: she is a rich Californian based businesswoman, who was living in Shoreditch, a rather exclusive suburb of East London (for the record average house price in Shoreditch, £754k, 2 bed flat), he was the Mayor of London. The two met up on numerous occasions to, depending on who or what you believe, either engage in a tutorial about computer technology or engage in pole dancing (there’s that desire to reach for the bladed instrument again). She was then awarded over £100,000 worth of grants from the public purse.

Would the same public assistance be offered to the average small businessman or woman from, say Sunderland or Swindon two of the place that are going to be catastrophically affected by the Brexit induced destruction of the British car industry or Bridgend or Dover, or Glasgow or bloody anywhere else for that matter? No. Are the ordinary struggling entrepreneurs from these areas being invited on foreign trade missions? Of course they aren’t.

Do not forget – Johnson is an old Etonian and Oxbridge graduate who went to work for the Times then the Telegraph. He is someone who owes everything to the corridors of privilege and open doors of opportunity that most of us will never have access to. In that world, giving a hundred thousand quid to a ‘special friend’ is perfectly acceptable. This is not the act of a heroic man of the people, it is the squalid act of spiv.

The Arcuri affair even with or without the sex exposes this man and his administration for the two bob con artists that they are.