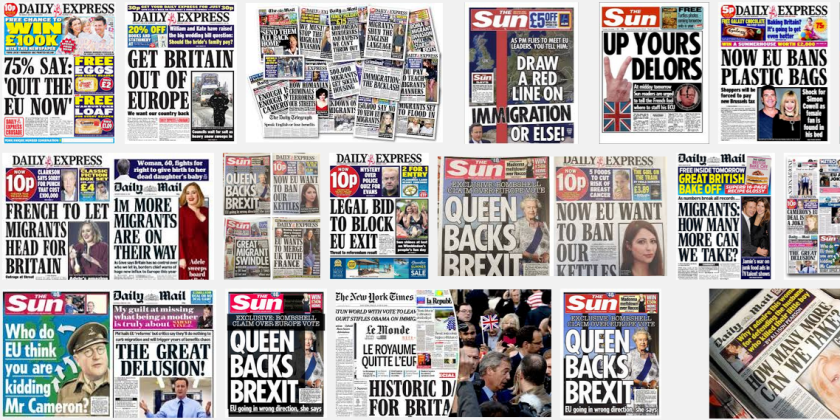 Where does all the hatred come from? Well, pop down to your local newsagents and you can buy some hatred on a daily basis.

Our tabloid media have for decades, focused their dog whistle xenophobic propaganda against the EU and immigrants.  The European Commission against Racism and Intolerance (ECRI) has previously criticised certain British media outlets, particularly tabloid newspapers, for “offensive, discriminatory and provocative terminology” against immigrants.

Sadly, it appears that many people have lost sight of the root cause of who to blame for a decline in wages, public services and the standard of living. Millions of people have been manipulated by politicians and media into mistakenly believing that their loss of hope was somehow the fault of the EU and immigrants. These messages have been hammered home by right-wing media outlets for over 20 years. And sadly, it has worked. Millions of people think that because of foreign incomers or foreign interference, they and their country have lost control. They have been told to take back control. There has been a huge diffusion from the usual suspects in politics and media to demonise the likes of the EU and immigrants to deflect from the failures of government. It is psychological projection. It is a gigantic con-trick. And tragically, it has worked.

The fake news scaremongering stories about the EU and immigrants can be traced back to a certain scruffy, wild haired, blonde, ex-Etonian who became a chief architect of Brexit and who unfathomably became our current Prime Minister. Boris Johnson may have thrown his weight behind the Leave campaign prior to the EU referendum in 2016, but his contribution to Brexit goes back more than two decades ago.

As a correspondent in Brussels for The Daily Telegraph in the early 1990s, Boris Johnson was a pioneer in cultivating disingenuous eurosceptic stories. With little regard for the truth, he wrote about the ‘unelected bureaucrats in Brussels’  scheming up directives to impose standard condom sizes and regulations on bendy bananas. He literally invented euro-bashing fake news. He turned fake news against the EU into a dark art form that is now used on a daily basis by many of our tabloids.

The EU referendum campaign itself, was a constant drip-feed of anti-EU and anti-immigration stories that were disingenuous at best and downright lying at worst, such as £350 million for the NHS and millions of Turkish people arriving in the UK. Our tabloids constantly screamed about immigration, with at least 30 negative front-page splashes in The Daily Mail in the six months leading up to the EU referendum, and 15 in The Sun. This was the real Project Fear.

The Sun, Daily Mail and Daily Express are united in their distrust and negativity towards the EU. To them, the EU exists to threaten the British way of life. Their messaging is a continued drip-feed of Britain as a plucky island nation separated physically and culturally from a ‘Johnny Foreigner’ Europe that threatens to dilute and destroy our proud traditions. For the tabloids, immigration and the opening up of our borders to Poles, Romanians and Bulgarians is simply a ruse designed by the EU to infiltrate and threaten British identity. This 20-year tabloid tactic of fear and loathing of foreigners is an appalling form of xenophobic propaganda that is based on lies, deceptions and playing upon misplaced identity insecurities. The messaging of Britain versus the outside world (in particular Europe); Britain standing alone; Britain having lost control of its borders; Britain winning wars in Europe – is an appalling con-trick designed to create xenophobic hatred and fear. It is gutter journalism of the lowest-common-denominator, where the perceived (but misplaced) fears about the loss of the nation’s independence and identity are projected onto blaming the EU and immigrants.

Britain should be looking outwards, but instead, certain sections of our media continually persist with trying to trap Britain into looking inwards. Until this cycle of fear is broken, Britain itself will remain broken and fearful.